In 2019, Julia was named honoree for the 2019 EcoStar Award from Sustainable Works. That same year, Julia received the 2019 Truman Award for Outstanding Volunteer of the Year by the San Fernando Valley Democratic Party.

Julia previously served as Campaign Manager to the Pat Harris For U.S. Senate campaign, a progressive Democratic campaign for U.S. Senate in 2018.

Julia has a decade of experience producing environmental justice events and campaigns around the world. Additionally, she has guest lectured at L.A. area colleges and schools including UCLA, Otis College of Art and Design, Pepperdine University, Santa Monica College, and Bridges Academy.

Julia currently serves as Board Member on the South Central Farm. She holds a BA in Anthropology and Environmental Systems & Societies from UCLA. She also completed the UCLA Social Enterprise Academy.

Julia previously served as Neighborhood Councilmember and Environmental Chair in Los Angeles, where she co-founded the Los Angeles Green Business Ambassadorship Program with the City of Los Angeles. During her term, she also served on Mayor Garcetti’s Advisory Group, working with environmental leaders to create a Green New Deal Neighborhood Council Toolkit. She also previously served as a Board member of the Pacific Palisades Democratic club. 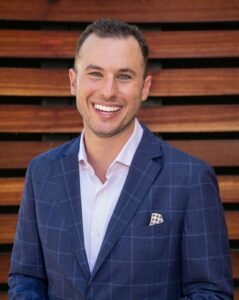 Born and raised in Los Angeles, CA, Max Goldberg is a proud co-founder of Shuki. He graduated from Emerson College in Boston, MA, where he studied entrepreneurship.

Max is an unapologetic Lord of the Rings fan, and hates running marathons but does them anyway.

Max has a long professional trajectory in digital advertising, having directed large teams at ad agencies, brands, and progressive political campaigns before launching Steel Straw with co-founder Julia Posin. He excitedly put a ring on it in 2018 and now Julia and Max are both happily married.